This recipe was first published in Funky Raw Magazine issue 25 (2012) – I’ve been making it again recently as grapes are in season.

I’ve recently discovered this drink and I love it. Jolita first made it, adapted from recipes in the book Nourishing Traditions by Sally Fallon, and then I worked out the exact recipe.

According to Nourishing Traditions, drinks like this were consumed by traditional people. Modern drinks like soft drinks, stronger alcohol and “sports drinks” have replaced traditional drinks. But of course the traditional drinks were much better! They contain lactobacilli probiotic bacteria which help with digestion, they quench the thirst much better than plain water and contain electrolytes and minerals so also great to drink when exercising, better than the so called “sports drinks”.

The fermentation will make this drink mildly alcoholic, our guess is less than 1%, similar to kombucha.

Remove the stalks from the grapes and place in a bowl.

Crush the grapes – I used the wooden ‘pusher’ from our juicer, maybe a rolling pin would work. (And I’ve recently discovered I can do it with my hands!) Try and make sure all the grapes have been crushed. 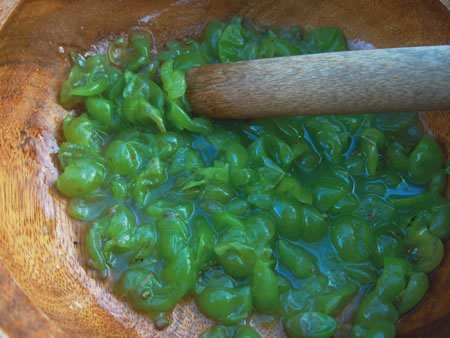 Place the crushed grapes into a 1 litre jar – I use a kilner jar.

Mix the lemon juice, honey and some water and add to the jar. Then add more water so that the jar is nearly full, but not completely as you need to leave room for expansion during the fermentation. 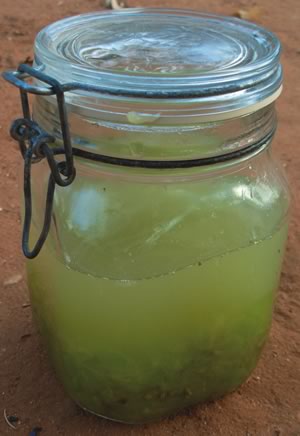 Fermentation time depends on temperature and other factors – try it after 24 hours but I have found that 36 to 48 hours is about perfect. To drink strain off the grape skins.
It doesn’t keep too long after getting to ‘perfect’, although it will probably keep better in the fridge at this point (we don’t have a fridge at the moment.) Also, the addition of whey is supposed to slow the fermentation down, which means it should keep a bit longer if you use it.

This recipe works with various fruits instead of grapes, we’ve tried with orange juice, lemon juice, pears and melons – lots to experiment with…