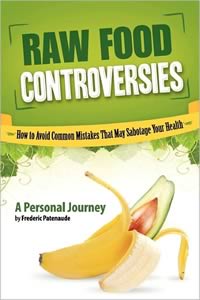 Why do some people fail on the raw food diet? That is the question that Frederic attempts to answer in his new book “Raw Food Controversies”. He does this by taking us for a ride on his journey over the last 14 years of his life, starting right back at the birth of the modern day raw food movement. The first part of this book is essentially an autobiography, with Frederic including every detail of his life (or so it seems) including his love life, how he met and became friends with David Wolfe and got to work for Natures First Law, and how he met many other famous raw food pioneers including David Klein, Juliano, David Jubb and more. If you have been involved with the raw food movement for many years, you might, like myself, find this section fascinating. If, on the other hand, you are new to the raw diet, you might, like a friend of mine, keep wondering when Frederic is going to get to the point.

This book is very refreshing in that Frederic questions the raw diet, none of the “raw is the best, raw will cure everything” some books are guilty of. Frederic experimented with various different raw diets, including animal foods, fasting even returning to cooked foods for some periods. He realised that raw diet is not simply eating all your food raw and hoping for the best, it needs careful planning.

The first few years on a raw diet left Frederic with a mouth full of cavities, which he discusses in detail, including his view on what cause the problem, and the solutions. If you read this book, I recommend you also read Cure Tooth Decay by Ramiel Nagel, for a completely different view on the subject (I don’t claim to know which author is correct, but if you have problems with your teeth, it’s best to read both opinions).

Towards the end, Frederic starts to pinpoint what he considers to be the ideal raw diet, which is a low fat vegan diet, with lots of fruit. Which is great that he has found a diet that works for himself, but I don’t agree with his belief that the same diet (with minor variations) will work for everyone. One example of how we are all different is the conversion of beta-carotene into vitamin A – we all have a differing ability to make this conversion and those people where this conversion is not optimal will not thrive on a vegan diet.

Frederic recommends a diet containing 7-15% fat, saying that before Western Civilisation took over, most people ate low fat diets, but he misses the research by Weston Price who found that traditional peoples ate diets which contained between 30-80% fat.

I realise that this review is critical, I think that is because this book is written in a way that attempts to show that Frederic’s current diet is the ideal diet for everyone, which I just can’t agree with. So, by all means read this book, but do it with an open mind. It is a very good book, I enjoyed reading it, and it makes some very good points. And the diet recommended might just work for you, but there is also a good chance that it won’t.

This review was first published in Issue 19 of the Funky Raw magazine.

4 thoughts on “Review of Raw Food Controversies by Frederic Patenaude”