Ok, if you know me, you will know that I ignore the news – in general I don’t watch TV, read newspapers, listen to the radio, etc. This week I’ve been listening to the radio because Lifescape magazine is doing a thing where they have challenged a DJ (James O’Brian) on LBC radio to go vegetarian for two weeks. We sent in some raw goodies for him to try so I’ve been listening to see if he comments on them.

Anyway, this means that I’ve been exposed to the news for the last week and can’t help having a rant about a couple of things I head. Firstly, Gordon Brown’s pre-budget aniouncement – he’s suddenly become environmentaly aware and is going to give a “green” budget, one of the measures he is going to put in place is a tax on budget flights, (which I think is a great idea). But then a couple of days later, I hear that the government has approved plans for a new runway at Heathrow airport, which will allow up to 500 extra flights per day. Is it just me or do those two stories contradict each other massivly? If they are going to allow more flights, charging a “green tax” does not mean that they will pollute less! I’ve never believed that the government was working for our best interest anyway, and this obviously proves that they are lying all the time, but why does no-one seem to care?

Wow, I found someone else who argrees with me that mobile phones are the work of the devil.  And they’ve published an article to say this on Wired (a technology magazine).  If you use a mobile phone, read it! 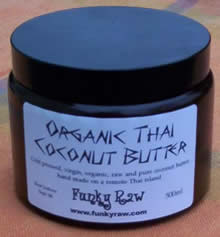 When I find a new ingredient, I tend to use it a lot to start with, so last night I made the parsnip thing again. This time I didn’t use sweetcorn and I used more spiring onion. I also added a bit of ginger an dried thyme – I liked it even more than the first version.

Today I’m putting more coconut butter into jars for the Funky Raw shop. I’m going to do a Vipassana meditation course on Wednesday which is 10 days long – I’ll be away for 12 days in total, so it seems like I have a lot to get finished. Anyway, the coconut butter is delicious, it’s hand made in Thaliand, completely raw, organic, etc. I can’t stop eating it myself, there’ll be none left to sell! I like to open a date up, fill with cacao nibs then top with coconut butter, mmm, I might just go and make one now…

Today I walked to Paignton.  It’s about 16km (10miles) and it was a beautiful walk.  Along country lanes, across fields, through woods, by streams and rivers.  In the last section just comming up to Paignton there is some aincient woodland and I found loads of wild garlic.  When I got home Holly made this into soup, which was delicious. 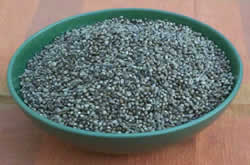 So, I’ve always loved photography and often, while thinking of a job I’d really enjoy doing, I’d think “there must be a way to earn some money from my photography”. And you can’t say I haven’t tried, see www.madmouseart.com, for example. So today I was surprised to relalise that I’d finaly done it, well nearly anyway. Today I was taking photos of hemp seeds for the online shop I run. Not the kind of photography I imagined, but it’s a start.

It seems everyone has a blog now so I thought I should get one.  I had a website before most people but seem to be the last to get a blog!