In August I found this plant growing right outside the house: 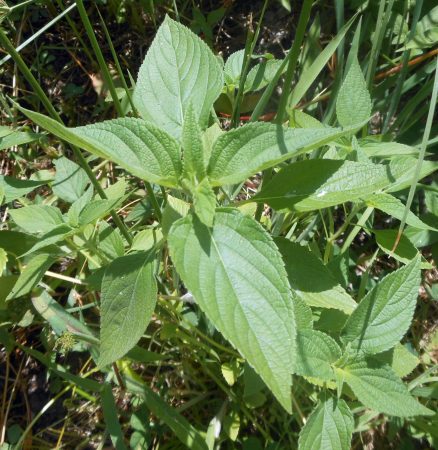 I’d never seen it before so I assumed it was something we had inadvertently introduced. I took a guess that it might by physalis (Incan berry, Physalis peruviana – yes even with a name like that it grows well in Europe!), it looked somewhat similar.

Anyway, as the months went by I realised it wasn’t physalis, but I didn’t know what it was. It has beautiful small blue flowers. Then yesterday by chance I saw a photo of a chia plant and the lightbulb went off in my head! So soon, we might be able to harvest some chia seeds… 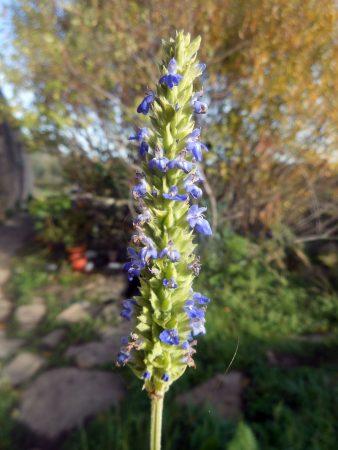 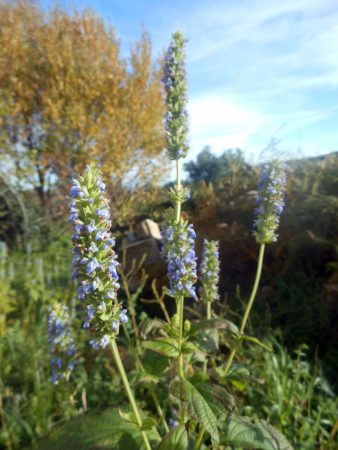 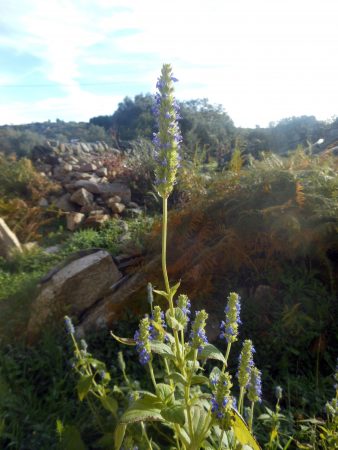 So, now you know, chia plants are easy to grow, just soak the seeds, scatter and wait!

I’m in the Czech Republic now for a while, yesterday evening I had a beautiful walk through the forest and by a lake, I saw a deer and a hare, and fish jumping in the lake. I’m staying in a little village near Hluboká nad Vltavou which is not far from České Budějovice. 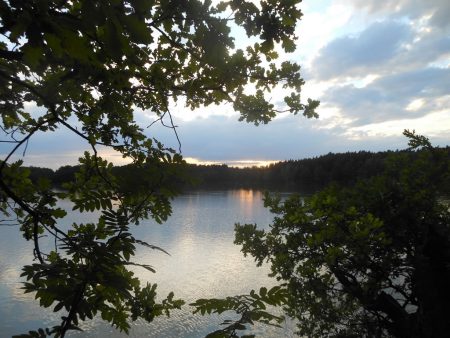 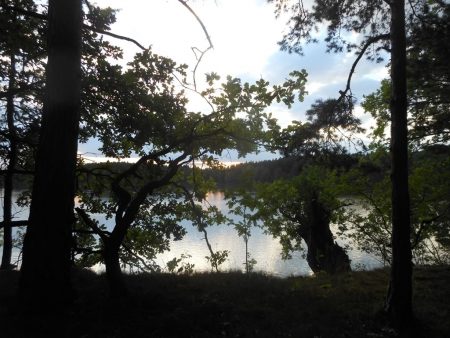 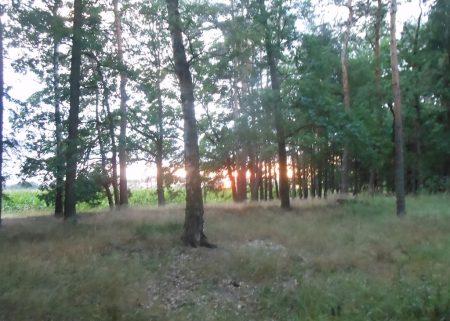 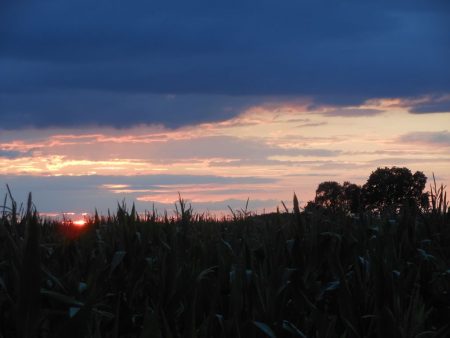 I’m a bit behind with this blog! I’ve been spending more time over on Facebook, you can follow me for shorter updates and ‘like’ Funky Raw for raw news. But I do plan to start updating this blog again now, as we’ve finally stopped travelling and found somewhere to live… The article below gives an update to our life, it was originally published in Funky Raw Magazine Issue 26:

If you remember back to 2010 my partner Jolita and I set off on a journey to find a place to live – land where we can grow our own food and run raw retreats and holidays. Well, eight countries and two and a half years later, our travels have come to an end, and our new life starts in Portugal. We’ve purchased 5 hectares of land in a “Parque Natural”, relatively remote and peaceful, with its own spring for drinking water in a reasonable climate – hot summers and mild winters, we still get some frosts in winter but also some lovely sunny days. 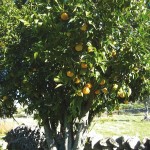 There are lots of olive trees on the land plus a few other fruit and nut trees including figs and kakis and so far we’ve planted apples, pears, figs, cherries, apricots, lemons, almonds, blueberries and raspberries. And we’re looking forward to planting a veg garden in the spring. 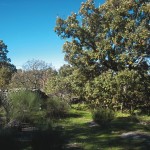 We want to create a forest garden so we read the book Forest Gardening by Robert A de J Hart. It is a wonderful book, although not the one we were hoping for! This book is a general introduction to the forest garden concept, told through the author’s own experience of growing his forest garden, with ideas on how forest gardens can change the world for the better. The book we wanted is a practical guide to creating a forest garden, we’ve now ordered what we hope is the book we need, Creating a Forest Garden by Martin Crawford. We watched a couple of videos on Youtube from Martin, he’s been doing a lot of research on forest gardens whilst growing one in Devon.
The idea behind a forest garden is to try and emulate a natural forest for minimal maintenance and environmental benefits, but with trees and plants which produce food and other useful resources, making use of 7 layers – large canopy trees, small trees & large shrubs, shade tolerant shrubs, perennial plants & herbs, ground cover plants, climbers & vines and root vegetables. 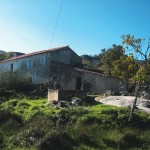 We’re happy to report that there are loads of wild greens on the land and lots of wild nature, birds, frogs, and some interesting lizard creatures we’ve never seen before, orange with black spots!

There are two houses on the land which we are in the process of restoring ready for running our retreats, more news soon…

We spent almost 3 months in Greece, from mid Jan to mid April, mostly on the mainland, although we did go to one island, Evia. The most surprising thing was the weather, it was a lot colder than I was expecting! Although we did have some really beautiful weather too.

This was our route (only approximately, you can only have a limited number of points on Google Maps): 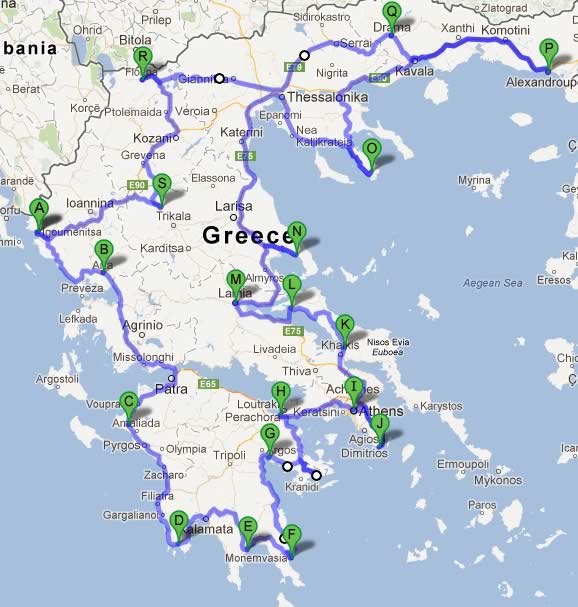 We got the ferry from Bari in Italy to Igoumenitsa and then fairly quickly travelled down to the Peloponnese, assuming it would be a little warmer there, although it wasn’t much different. We stayed on a campsite in Gythio for a month over the worst of the winter, the campsite has a large shared room with heating where we could spend our time when it was too cold and wet!

Click on any photo to enlarge, then you can scroll through the large versions.

Hope you like them, please feel free to leave your comments or questions below.

I’m going to interview Anthony Anderson of RawModel.com soon and publishing it here on this blog. He’s coming to England next month to speak at the Vitality Planet event in London. His mission is to inspire others to plant paradise on the planet once again, promoting Permaculture and planting food forests. If you have any questions you want me to ask him, please post them in the comments section.

I got a little behind with travel updates – for now I’ve skipped forward to Croatia, which was November – December last year. Croatia is a really beautiful country, and the local food from the markets was of amazing quality. 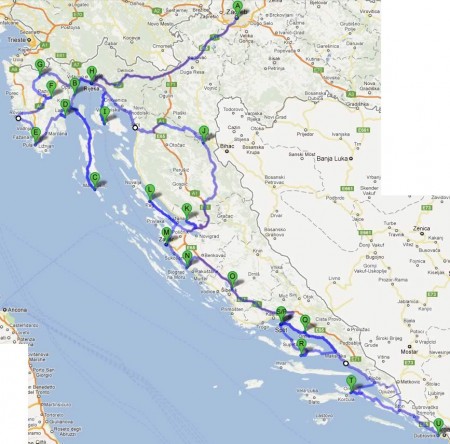 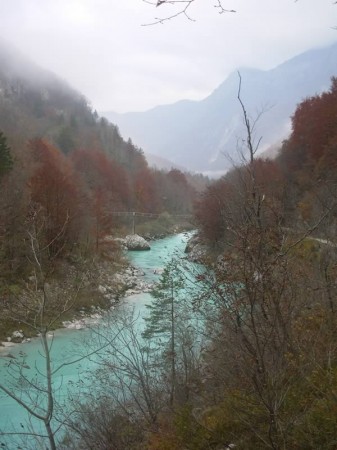 After a short break in London, we’re back on the road. We’re heading to Croatia, but had a little detour to Slovenia. It’s a beautiful country, loads of forest and wild nature. On Saturday we went to Ljubljana, the capital and found an amazing market. Loads of organic veg stalls, plus we got organic raw milk, raw butter, raw sour cream and raw cheese.

I love cheesecake, and it is actually very easy to make raw cheesecake, assuming you can get some good raw cheese to start with. We got some soft plain curd cheese, it needs to be fairly plain to make into cheesecake.

I didn’t measure the ingredients, but I think this is a recipe where it is hard to go wrong. 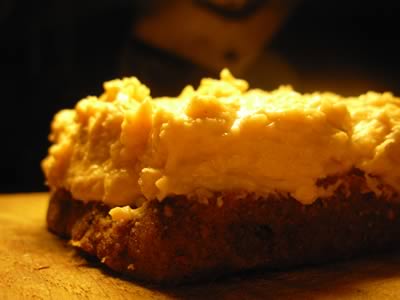 For the base, you want an approximately equal amount of nuts and dried fruit, you can use various combinations of fruits and nuts. I soaked the apricots for a couple of hours so they would process easier, but you don’t want them too wet otherwise the base will be soggy. Put all the ingredients in a food processor until it forms a sticky ball. If you need more liquid you can either add a little lemon juice or water. As you may know, I don’t generally eat dehydrated food as I find it hard to digest, so this base was soft and sticky, but you could probably dehydrate this is you want a more traditional cheesecake.

For the topping, just mix all the ingredients together. The more lucuma you add, the thicker the mixture will become. And of course, the more honey, the sweeter. (The cheese I used was very soft so I only needed to mix it with a spoon, with a firmer cheese you may need to blend.)

I’m sure there are many variations you can make instead of lemon. 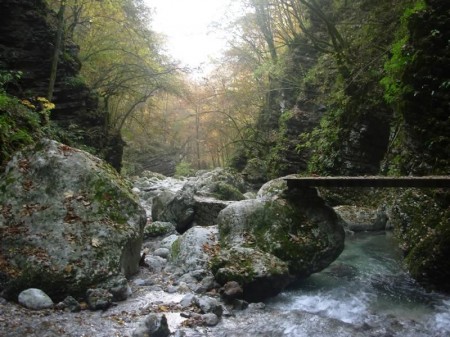 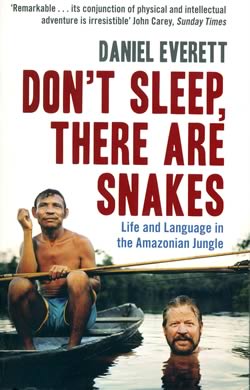 I’ve read a few really excellent books recently which I want to share with you all. I’ve just finished reading Don’t Sleep, There Are Snakes by Daniel Everett. This book defies categorisation, on the back it says “Travel/Linguistics”, both of which are correct, but this book covers so much more than that. Daniel was a Christian missionary who went to try to convert an Amazonian tribe, the Pirahá, to Christianity. To do this, his first task was to learn the language and then translate the New Testament of the Bible to the Pirahá language. This might not sound too difficult, but Pirahá doesn’t have a written form, no-one else speaks it, there are no dictionaries or teach yourself courses, and the Pirahá people don’t speak any other language (apart from a few words of Portuguese). So Daniel moves, with his family, to a Pirahá village to live with these people and learn their language. (Daniel is a trained linguist so he does know how to go about the task.)

The book is in three parts: Life, Language and Conclusion.

Part 1, Life, which is the largest section of the book, is a selection of experiences, challenges and insights during Daniel’s life while living with the Pirahá people. One of the most fascinating things about the Pirahá is that they seem to live in the present moment, much more than us westerners could even imagine possible. They have a very minimal amount of personal possessions. In general, they do not store food – they go out hunting/gathering almost every day, if they don’t, they don’t eat that day (which is ok by them, a self imposed fast).

The Pirahá people will only talk about things that they themselves have experienced, or that someone else they know who is still living has experienced. This was one of the major challenges Daniel encountered when attempting to talk about Jesus – once the Pirahá realised that Daniel had never met Jesus, and that Jesus died a long long time ago, they weren’t interested!

The second part, Language, goes into much more detail about the Pirahá language. I found the first half of this interesting and easy to read, although the second half started getting much more technical and possibly only interesting to linguists. But even if you skip part of this section, it doesn’t detract from the rest of the book, and it is only a small part of the whole book.

The conclusion contains the information that convinced me to read this book in the first place – after living with the Pirahá people for many years, Daniel didn’t manage to convert a single Pirahá, and in the end Daniel stopped believing himself. To ‘save’ someone by converting them to Christianity, they would need something to be saved from, and Daniel found that the Pirahá were the happiest people he ever met, and didn’t need saving!

I highly recommend this book, there is so much to be learnt from the Pirahá people.

The nature here in central Portugal is amazing. You can hear birds signing and other animal sounds all the time. Yesterday, I saw this, I’m not sure what it is, sort of half butterfly, half something else! It sat there for ages while I took some close up photos. If anyone does know what it is, please let me know in the comments. 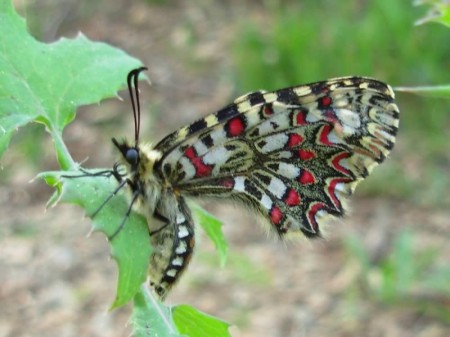 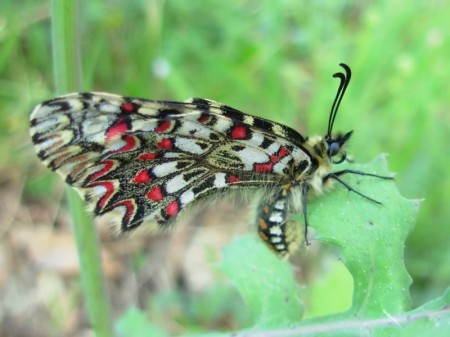 Some beautiful scenery in this part of the world. This is the final part of this section of our trip, from Bagneres de Bigorre we drove through the Pyrenees into Spain, across to the Spanish and then French Basque Country then along the Spanish coast to Santander where we took the 24 hour ferry to Portsmouth – we then spent a month in the UK, mostly in London. 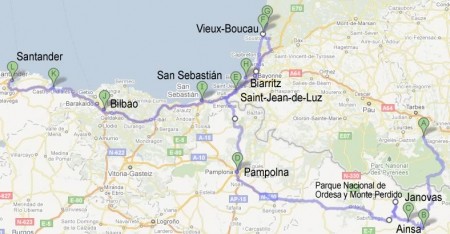