Until now, the only “raw food” we’ve had in Greece has been the fresh fruits and vegetables from the markets. It’s been of exceptionally high quality, but sometimes I want some prepared raw food… Synchronistically, I got an email from an American living in Athens about writing for the Funky Raw magazine, perfect timing for us to get some tips for raw food in the capital.

So on Friday night, we went to Nice ‘n’ Easy Bio Cafe, 60 Omirou Street, an organic restaurant which has 3 specifically raw items on the menu. They also have a range of salads which are almost raw. From the raw menu, I ordered a mock tuna dish, which was ok but fairly bland. I also got a green salad which came with goats cheese (not sure if from raw milk but I ate it, was delicious) and sun dried tomatoes, with a wine based dressing (probably not raw), this was really good. We tried to order the raw dessert, but they didn’t have any left – that’s the problem with places where raw food is only a small part of their menu. The website is only in Greek, but the menu was in English and the staff spoke English.

We had more success in the organic shop at 30 Nikis Street (not far from Syntagma metro), I think it is called Emporio Trofimon, but easy to spot next to a vegetarian café called Avocado with a colourful avocado painted on the wall. As well as the usual organic fruit and veg, there was a wide range of raw foods: raw chocolate bars (we got a couple of coconut Om bars), Biscru crackers, raw snack bars and a wide range of superfoods including lucuma, camu camu, acai, raw chocolate ingredients and more. Probably a better range than in most organic shops in the UK!

And now, what you’ve all been waiting for, the obligatory photos of the Acropolis: 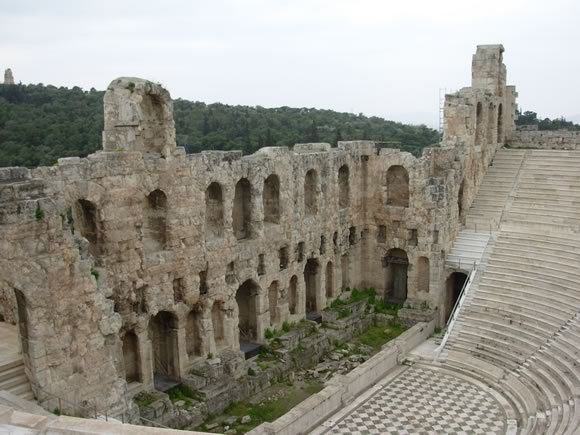 One thought on “Raw in Athens”