One of the things I love about my job is all the free samples I get sent to try out. A couple of weeks ago I got sent samples of a new range of raw chocolate bars by Mulu. I remember a long time ago I used to really like Mulu bars, but I stopped eating and selling them because they contained agave which I found was not healthy. So when I was told these new bars are sweetened with SugaVida I was very excited to try them.

And wow, I wasn’t disappointed. They are my new favourite raw chocolate bars! There are five bars in the range, four of which are “milk” chocolate style, using coconut cream as a vegan replacement for milk, and the other is a dark chocolate bar.

All the “milk” chocolate bars are amazing, the best raw “milk” chocolate I have ever tried. I’ll go through each flavour, in approximate order of which was my favourite, although the first three pretty much tie for first place. 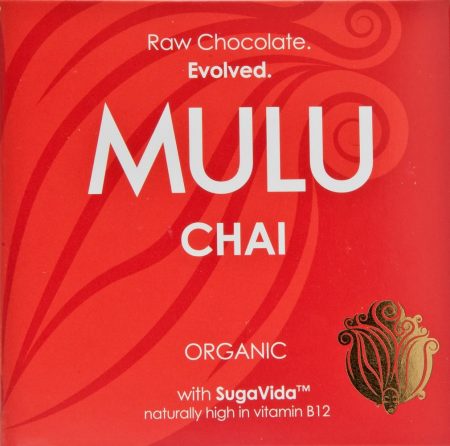 Hazelnut – Also amazing! Containing both hazelnut pieces and hazelnut butter, which gives a delicious hazelnut flavour and crunchy texture, along with the creamy “milk” chocolate.

Coconut – Basically a plain “milk” chocolate bar, so creamy with all that coconut cream.

85% – This is the dark chocolate bar. For me this wasn’t quiet as exciting as the rest of the range, the coconut cream really is the standout point of these new bars, and this one doesn’t contain any. But still a good chocolate bar.

SugaVida (palmyra Jaggery) is the sweetener from a plam tree, claimed to be even better than coconut sugar, containing more minerals and having a glycemic index of 40. They even claim it has vitamin B12, I’ve not checked into this but personally I wouldn’t rely on it! [Edit: Ben from Mulu contacted me and said that they have had this tested in the lab and that it does have B12 in it, although I still personally wouldn’t rely on this as my only source of B12.]

We’ve now got these bars for sale at Funky Raw with a special introductory discount of 10%. Plus we have a selection pack with one bar of each flavour with an even larger saving.