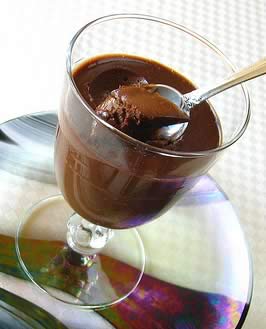 The other day we had a meal in a non-raw restaurant. Not something we do very often, but especially while travelling where there are no raw places to eat it can be fun. Interestingly, it was the decision to stop trying to be 100% strict about my diet which enabled me to stick to eating raw more than when I was trying to be strict. Counter-intuitive, but life is so much easier when there are no rules! Anyway, back to the restaurant. We shared a chocolate mousse for dessert and it was so good that when I got home I decided to look up how to make chocolate mousse to try and make a raw version.

Surprisingly, most recipes didn’t need much tweaking to make them 100% raw – they already contain raw eggs, just substitute raw chocolate for the cooked chocolate (and use raw butter and/or raw cream in the recipes that call for these ingredients.) This is the page I found on the Guardian website with a good selection of chocolate mousse recipes and useful comments.

So yesterday I tried the first recipe from that site, the classic French recipe from the book French Provincial Cooking by Elizabeth David and it worked really well.

First I made raw chocolate using the following, quantities approximate:

I grated the cacao butter and paste, added the butter and melted over a bowl of hot water (bain marie style). When fully melted I slowly stirred in all the other ingredients. This made too much chocolate, so I took 90g of the still melted chocolate for the mousse, and put the rest in moulds.

I then followed the recipe from the Guardian website above, using 30g of chocolate and 1 egg per portion. So I mixed 3 egg yolks into the melted chocolate (although of course I didn’t have the water simmering, I just kept it warm to keep the chocolate melted). Then I beat the 3 egg whites until they were relatively stiff (they use the term “soft peaks”) and gently folded this in to the chocolate and egg yolk mixture. Put in the fridge to set and you have a delicious raw chocolate mousse!

I’m sure it would work with other raw chocolate recipes, or even a purchased raw chocolate bar that you melt back down. Let me know in the comments below if you try this or any of the other recipes on that web page…