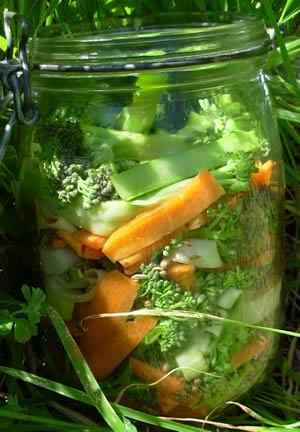 This was my first attempted at fermenting vegetables and it worked really well, although I think I put too much salt in. I followed the technique on pages 50-52 in the book Wild Fermentation “Sour Pickles”.

I sliced the carrots and cut the broccoli up, you can see the approximate sizes in the photo. I then sliced some leek,  I think I used about 1/4 of a leek. I used a couple of handfuls of coriander seeds and cumin seeds to flavour it, some whole and some crushed.

I put everything in a kilner jar and added water with salt dissolved in it, I think for this 1 litre jar I used 500 ml water with 1 and a half tablespoons of salt, but if I did it again I would use less. I then put a clean (well scrubbed) stone on top of the veg to hold it under the saltwater solution. After about 2 weeks fermenting they had an amazing flavour, but you can try them during the whole process to see how they develop.

You need to check them daily and if any mould forms on the surface it needs to be removed.

One thought on “Fermented Broccoli and Carrot with Leek”