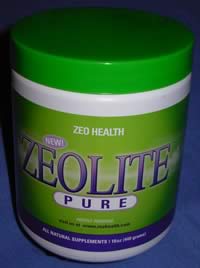 I just bought some Zeolite from Holly’s new shop Ocean Wave Vibrations. Zeolite is supposed to remove heavy metals, especially mercury, from the body and when I first heard about it I was quite skeptical.  But I did a bit of research and it started to sound a bit more plausable.  The Wikipedia article on Zeolites explains their use in a scientific setting and although it doesn’t mention their use internally, it explains how they have an open structure which can take in other molecules and that they are used in water purification systems. Zeolite is not absorbed by the body – the idea is that it takes the toxins into it’s structure and then is eliminated from the body.

According to the label “It is one of only 2 minerals that is negatively charged by nature, which means it actually attracts toxins like a magnet.”

So, does it work? Well, I don’t know yet.  I’ve started taking 1tsp a day and will see what happens.  I know Gabriel Cousens recomends it, which is a good recomendation I think.